Take a step back in time and enjoy a slice of history with these historical Paris monuments!

Paris monuments tell the fascinating story of this roughly 2000-year-old capital city. Steeped in history and famous for their beautiful architecture, there are many to choose from. Since time may not be on your side, we've compiled a useful list of 10 must-see monuments. We hope that by visiting some of these attractions, you’ll fall in love with Paris just as much as we have.

The Eiffel Tower is the most visited monument in the world and certainly one of the most iconic in Paris. Designed by architect and engineer Gustave Eiffel, the tower was commissioned for the 1889 ‘Exposition Universelle’, commemorating the 100th anniversary of the French Revolution. Standing 324m tall, the Eiffel tower is made of 18,000 metallic parts,  joined by 2.5 million rivets and was only originally meant to stand for 20 years.  If you’re feeling energetic, you can climb the 1665 steps to the most breathtaking panoramic views of Paris. Alternatively, you can take the elevator to the top!

The Louvre is not only the world’s biggest museum, but also the most visited. Housed in two former royal palaces dating back to the 12th century, it’s a beautiful monument in its own right. Step inside, and you’ll find 35,000 works of art spread over 350 different rooms and exhibition spaces. Simply walking around all of the rooms without pausing would take the best part of nine hours! So our advice is to decide in advance which exhibits you’re interested in – especially if you’re visiting with children. If you want to take a guided tour, there are plenty to choose from.

Notre Dame is a spectacularly beautiful example of French-Gothic architecture, and should not be missed. Construction began in 1163 and continued under a variety of architects until 1345. The result is a mix of architectural styles added to the original gothic influence - all enhancing the sprawling but quirky magnificence of this building. You’ll instantly recognize the stained-glass ‘rose window’, the ghoulish gargoyles and chimera statues and, of course, the Virgin and Child. If you’re keen to take in more views, why not climb one of the spires? Or head into the cathedral to explore some Catholic relics, including the Crown of Thorns.

A jewel of the Rayonnant Gothic period, the 13th-century Sainte-Chapelle chapel is most famous for its 1113 stained-glass windows depicting scenes from the Old and New Testaments. The chapel was originally built to hold the French Catholic Church’s most prized relics, such as the Crown of Thorns (now in Notre Dame). Sainte-Chapelle is a designated UNESCO world heritage site and both audio tours as well as traditional guided tours are available, explaining the chapel’s history, stained-glass art and other details you might otherwise have missed.

The Luxembourg Palace is a beautiful example of early French classical architecture. It was originally commissioned in 1615 by French regent Marie de Médicis (mother of Louis XIII) and designed by architect Salomon de Brosse. As well as housing royals, the Palace has had a number of functions: it was the original royal art gallery (before it moved to the Louvre) and was even used as a prison during the French Revolution. From the beginning of the 19th century, however, it has mainly been used as the seat of the French Senate. In addition to its iconic architecture (inside and out), the palace is situated in 22.5 hectares of gardens. The ‘Jardin du Luxembourg’ is the finest and largest park in Paris, and contains as much art and history as the palace itself. 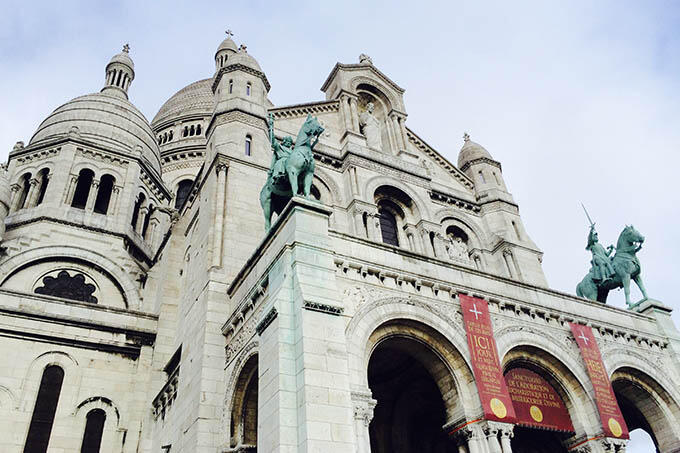 Look up to the top of Montmartre and you can’t miss the white domes of the Basilica of Sacré-Cœur. The basilica contains France’s largest mosaic, an enormous 480m², and the panoramic views from its 130m-high dome are among the city’s best. Consecrated in 1919, the basilica was built in the Roman-Byzantine style and contains a crypt where the famous French cardinals Guibert and Richard are buried. While you’re there, wander through the adjacent Abbesses area, once the artists’ quarter and home to Picasso.

The Arc de Triomphe is the centerpiece of ‘L'Axe historique’, a sequence of grand boulevards and monuments stretching from the Louvre to the outskirts of Paris. Built in honour of those who fought for France, particularly during the Napoleonic Wars, the 49.5m arc holds the Tomb of the Unknown Soldier from World War I, and a memorial flame burns to honour those lost in battle. You can’t miss it at the western end of the Champs-Élysées, in the centre of the Place Charles de Gaulle.

The Musée d'Orsay is a former railway station on the left bank of the Seine, built in the Beaux-Arts style and home to France’s national collection of impressionist, post-impressionist and art nouveau treasures. Many of the most famous works by Monet, Cézanne, Picasso and van Gogh can be found here. Musée d'Orsay is second only to the Louvre as a home to world famous paintings as well as containing a wide selection of other decorative and graphic artworks and sculptures.

The Hôtel des Invalides is a group of buildings dating from 1678, originally commissioned by Louis IVX as a hospital and retirement home for France’s war veterans. Les Invalides now contains several museums and monuments dedicated to France’s military history, as well as, to this day, a hospital and retirement home for war veterans. The Dôme des Invalides church within the complex is the burial site of none other than Napoleon Bonaparte himself as well as several other of France’s most famous war heroes.

The Palace of Versailles

Another UNESCO world heritage site, the Palace of Versailles is one of the world’s most lavishly opulent palaces. With floor space covering 721,206 square feet and 230 acres of beautiful gardens, it is also one of the biggest. Perhaps the highlight of the palace is the Hall of Mirrors, a spectacular corridor of 357 mirrors reflecting the gardens outside through the arched windows, though the splendour of the Chapel of Versailles is a close second. Other must-sees include Marie Antoinette’s apartment, the Grand Apartment and the Opera auditorium. Despite its location on the outskirts of the city, this is one of the most visited Paris monuments. The 18th-century building is beautiful in itself, but it’s the spectacular interior, dripping in art and wealth, that really draws visitors. Our top ten historical Paris monuments are a good starting point for any visit to the City of Light. There is so much to see and do in Paris, you’ll be spoilt for choice! Wishing you a good trip.