The vast Compiègne forest surrounds the grounds of the Château de Compiègne. Situated in the northern part of France, it is not frequented as much as the Palace of Versailles. What a shame! It is a site that holds so much historical interest and is quite stunning in its own right. In this article, we’ll explore the history of the evolution of the castle, the Kings and Emperors who made their mark there, as well as what to expect when visiting the Museum! 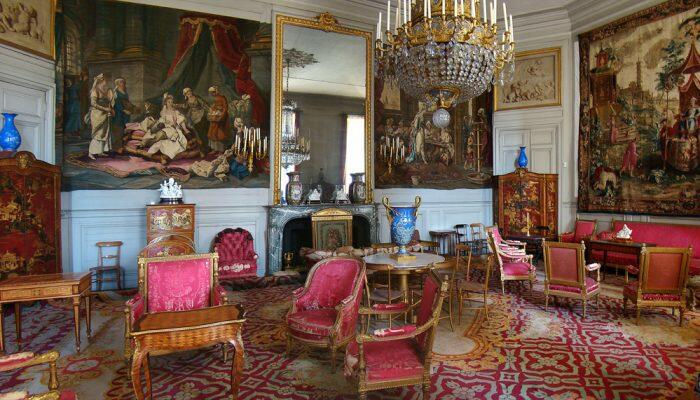 Brief History of the Castle

To start, the castle that stands today is the fourth existing castle on the grounds. Consequently, its original history dates back to the sixth century and to the reign of King Clovis I. Originally, the castle was made out of wood. In the successive centuries, it was further expanded upon and rebuilt by many monarchs. However, it wasn’t until 1374 that construction began for Charles V’s fortified castle. The foundations from this period are the only part of the original castle that still exists today.

Why were the royals so interested in Compiègne? Quite simply, the hunting. Most of France’s sovereigns enjoyed the hunt. As a matter of fact, Francis I had hunting paths built within the woods during the Renaissance. Their purpose was to relay more easily with the rest of the hunting party and to better trap the poor beasts they were chasing. Also, the direction posts really helped in the 14,414 hectares (35,620 acres) woods, as you can well imagine.

The Château had fallen into ruin during the Wars of Religion. Though Louis XIII had taken a little interest in updating the castle, it still needed a lot of work. When the 18 year-old Louis XV visited Compiègne for the first time, he became enamoured with the forest, the hunting and the grounds. So much so, that he ordered the reconstruction of the building in a style that befitted his reign and tastes in 1751. It was to become the King’s favourite residence. In fact, he would spend a lot of time there, more than any other monarch before him. At one time, Louis XV even dreamed of leaving Versailles behind and living in Compiègne permanently.

In contrast, the next king, Louis XVI, rarely spent any time there. Though he did commission the reconstruction of the royal apartments. Unfortunately, he and his Queen, Marie-Antoinette, would not live to see the finished result, due to the French Revolution.

During the First French Revolution, the château was looted in 1795. Consequently, much of the artwork and furniture from both Louis XV and Louis XVI periods were stolen. However, Napoleon would take great interest in the property. In 1807 he gave orders to restore the castle, and return it to its former glory, but with a neoclassical pseudo-roman Imperial twist. Renovations on the interior of the castle took place from 1808-1810.

Compiègne would once again become integral to both political and courtly life in France. Also, Napoleon was responsible for the remarkable grand perspective that cut the forest in two and follows a 4,600 meters (15091.86 ft.) line. Still visible today, it is grand indeed!

Like his uncle, Napoleon I, Napoleon III also fell in love with Compiègne. He and Empress Eugénie expanded the château and held famous gatherings during the autumn months. For example, the brightest lights of the court were invited to spend weeks at a time at Compiègne where a litany of activities were organized for them including hunting, theatrical and musical performances, and games etc. The court etiquette was relaxed a bit in the county, and the soirées were legendary. In honour of those lively autumn months filled with entertainment, the Château de Compiègne continues to host classical music performances every year.

In addition, the Imperial couple also had a parcours constructed from the Château de Compiègne to the Château de Pierrefonds. What fun it must have been! It takes three hours by foot through the forest to reach the other castle, and approximately 16 minutes by car. 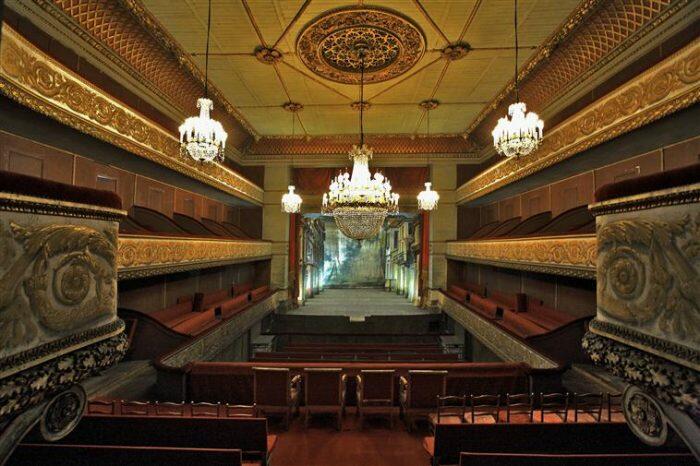 After WW II, conservationists set to work assembling treasures from Louis XV to Napoleon III to display at the castle. All of which have been preserved and are still on display for the public to enjoy. The castle was classified as a historical monument in 1994, and it houses three separate museums. The Museums include: the Museum of the Second Empire, the Empresses’ Museum and the Museum of the Car and Tourism.

The Musem of the Second Empire and the Empress’ Museum

Dedicated to the life, art and personal mementoes of Emperor Napoleon III and Empress Eugénie, the museum offers a glimpse into the Imperial magnificence. The collection is rich in paintings, sculptures, photographs, furniture, and even clothing belonging to the couple.

The National Museum of the Car and Tourism

Founded in 1927, the Museum traces the history of the carriage as well as the first automobiles and bicycles. Interestingly, the château regularly hosts vintage car gatherings, and is, of course, a delight for car enthusiasts.

Measuring 183 hectares (452 acres), the park and gardens surrounding the castle are filled with statues inspired by the French neoclassical period. In addition, the grounds also have elegant pavilions, a charming rose garden, and a covered walkway called the “allée des Beaux-Monts” which spans 5 km (3 miles). The alley links the gardens to a larger park that backs onto the forest.

The remarkable ‘little theatre’ was built in 1832. It is unique in the fact that it is completely preserved in its original state from this era. Complete with original sliding set-pieces, as well as the ropes for raising and lowering the multi-layered curtains.

In keeping with tradition, the Château continues to host classical music performances and temporary exhibitions in varying art forms. Also, they have a lovely tea salon in the rose garden which is open to the public during the warmer months. There is always plenty to see and do at the Château de Compiègne!

Your Visit to the Château de Compiègne

Only 24 km (15 miles) north-east of Paris, a visit to the Château de Compiègne makes for a wonderful day trip! Also, while you’re in the area, why not also enjoy the romance of Medieval France at the Château de Pierrefonds?

Hours for the park: