We know what you’re thinking, who in their right mind would want to descend to the deepest depths of the city  (20 meters, or 65 feet) to see human remains? Surprisingly, over 550,000 people every year! The Paris Catacombs have a fascinating history which dates back to ancient times, and is the final resting place of over 6 million Parisians. In this article, we will uncover the origins of the Paris Catacombs, as well as how it came to be an underground ossuary. 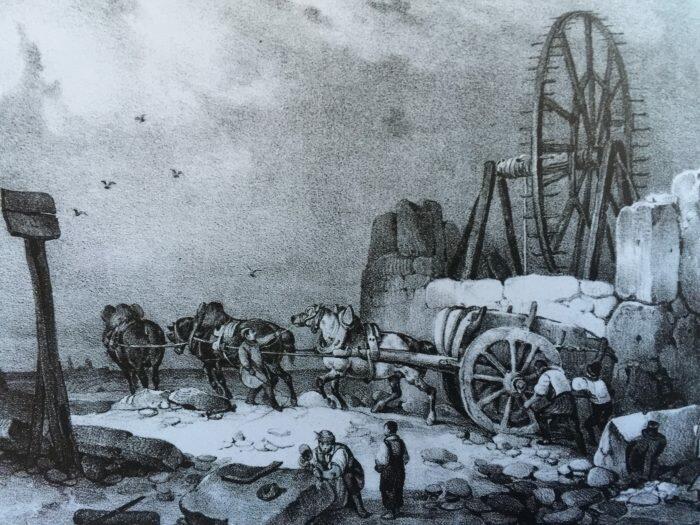 Paris has always been rich in natural resources including sand, sandstone, gypsum, clay, and limestone. Since the ancient Roman occupation, they were mined and used as building materials. Though abandoned for a while, mining began again in the Middle Ages due to the construction of the city fortifications and fortresses. As the demand increased, the network of mines expanded underneath the city. However, it wasn’t properly regulated by authorities. The dry stone pillars put in place for support were not adequate. Subsequently, the Paris quarries were closed by decree in 1776 due to numerous and disastrous cave ins in the center of the city. We’re talking whole buildings falling through the earth...it must have been unbelievable! 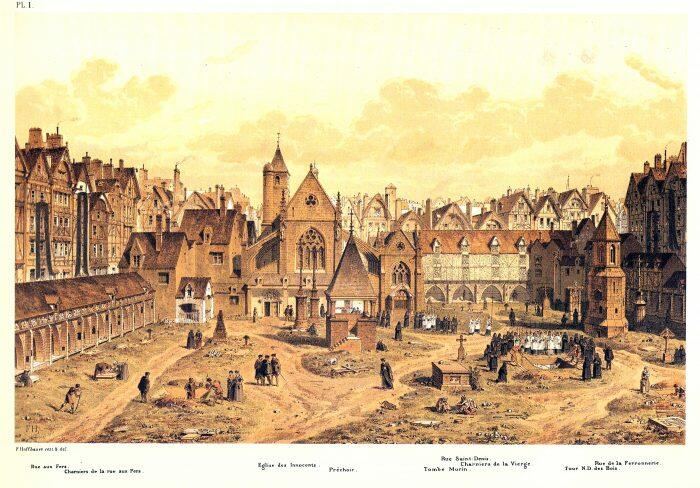 Saints Innocents was a Parisian cemetery that dates back to the 5th century! It was located in the central part of Paris in what is now Les Halles. During the Middle Ages, burials traditionally took place on the consecrated ground surrounding churches. Life and death were closely linked, and by that I mean they were in very direct proximity. For example, the market place was located right near the church property. Even in Medieval times, Parisian burial space was a hot commodity. While rich could afford crypts within the church itself, and the poor were often relegated to mass graves. The only problem? The mass graves began overflowing. Enter the charnel house..

To help with the overcrowding problem, grave diggers would remove the fully decomposed corpses, aka the bones and move them to the charnel house. Yes, the bones were visible to all, it was a galley surrounding the cemetery, and there were even murals depicting death decorating the walls. The infamous “Danse Macabre”, a motif featuring joyful skeletons dancing with the living, reminding everyone that the same fate awaits them. Happy death time, right? It really wasn’t such a far leap of the imagination or as gruesome as it might seem today. The mortality rate was very low in the Middle Ages and those who made it to 60 were considered lucky, and you were even luckier make it through childbirth.

So, if the charnel house system was working, why would King Louis XVI close the cemetery in 1780? Simply put, the mass graves were overflowing due to the increase in population, and therefore the increase in corpses. It stank of decomposition, which must have been charming during the summer months. However, what really brought matters to a head, there were several collapses houses surrounding the cemetery. You guessed it, decomposing bodies exploding into people’s basements! We can’t even...

That was enough for Louis XVI and Parisian citizens. The following years were spent moving human remains into the Catacombs, the transports happened mostly at night. Priests aided by giving benedictions to the dead. Chiefly, this was because Catholics viewed it as a sacrilege to disturb and move the dead from holy ground. Throughout the following years, other cemeteries in Paris were also excavated.

While there were plans to build new cemeteries on the outskirts of the city, Louis XVI didn’t have time to put this into action. The first French Revolution took place in 1789, and the ill-fated King was guillotined in 1793. It wasn't until after the Revolution, during the reign of Napoleon I, that construction plans for new cemeteries on the then outskirts of Paris were undertaken. 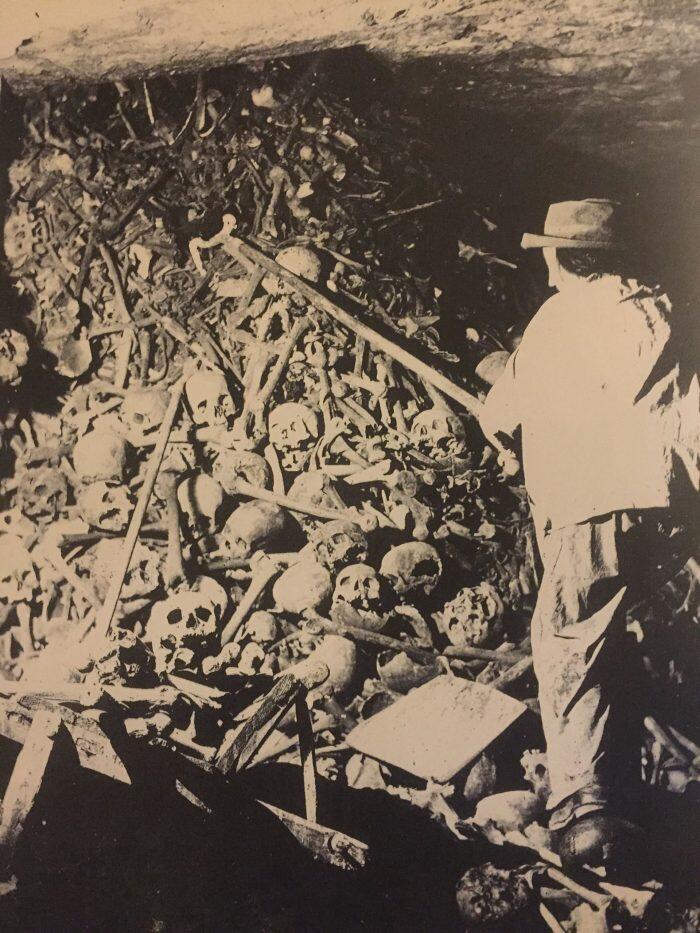 A Museum or an Underground Ossuary?

Unfortunately, when the human remains were originally placed in the Catacombs, they had been stacked in half hazard piles. In the early 19th century, under the leadership of Inspector Héricart de Thury, Director of the Paris Mine Inspection Service, the bones were stacked in a respectful and artistic fashion. In addition, he added Egyptian and Byzantine themed archways. Also, poetic quotes about death are inscribed on tablets throughout the tunnel, the purpose of which was to remind visitors that the same fate awaits us all...

In 1809, the Catacombs were opened to the public by appointment only. Throughout the century, visiting hours varied, it was opened quarterly, then completed closed, only to re-opened on a monthly basis. Now part of the City of Paris Museums, the Catacombs are open 6 days a week.

-It takes visitors approximately 1 hour to tour the Catacombs 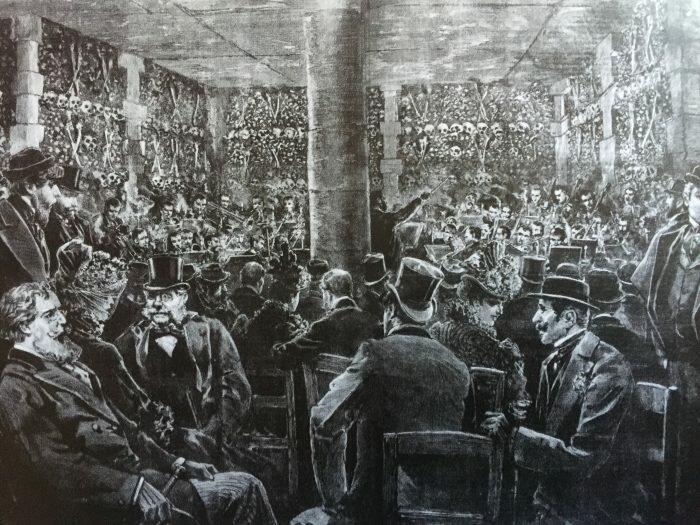 On April 2, 1897 a clandestine concert was organized in the ossuary. People received secretive invitations, and were instructed not to park their carriages near the main entrance. Over one hundred guests descended into the depths of the 'Empire of the Dead' to hear Chopin's Funeral March and Saint-Saëns' Danse Macabre performed by members of the Parisian Orchestra. There were libations, and by all accounts, every one had a jolly time.

First off, the term 'Catacombs' denoted the ossuary part of the tunnels. However, now the term is used to describe the tunnels in their entirety. Now that we're clear, a Cataphile is someone who is passionate about the Catacombs, and who regularly explores the complex network of underground tunnels. Think of it as the Indiana Jones’ of Paris, except maybe not so much with the magical historical artifacts. Then again, maybe there are, who knows! Either way, it’s not exactly legal but that doesn’t seem to deter them. There are many entrances, potholes, and other ways to get in. Also, true Cataphiles make their own maps and are the result of the fruits of their labour. Some spaces are so small that they have to crawl through, and many of the tunnels are inundated with water. Sounds like fun?

In addition, underground parties take place in the Catacombs on a regular basis, and many of the tunnels are covered with street art. French Police even found a fully functioning movie theatre in the Catacombs! While there is a sense of freedom and lawlessness in the tunnels, Cataphiles have their own code of conduct and respect the space. Only a fraction of the tunnels are filled with human remains. Thank goodness! That would make for an intense rave indeed! 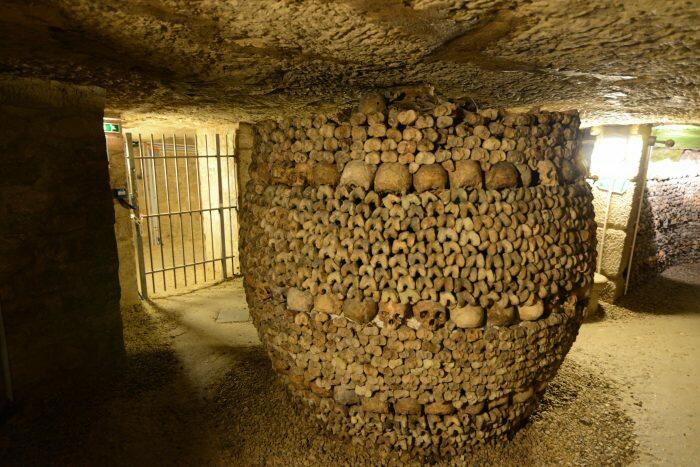 Your Visit to the Paris Catacombs

In conclusion, there are two types of people, those who want to see human remains artistically displayed and those who absolutely do not. Don’t worry if you fit into the latter category! Admittedly, the Paris Catacombs may not be for everyone. However, if you want to take a trip to the underworld, or as the sign puts it, ‘The Empire of Death’, then this is definitely for you! Interesting to visit, but even better to leave...

*Priority access tickets, including audioguide, are available for purchase online.

Find out which monuments and museums are included in the Paris Pass!
Tags
Paris Attractions
Previous post