It's impossible to miss the Panthéon in the 5th Arrondissement, with its towering spire and ancient Roman pillars providing a stunning change of scenery amidst the Parisian buildings. With strong ties to Paris' tumultuous history and France's greatest icons, its intricate halls are always filled with tourists looking for a glimpse into the past. Here's some facts about the Panthéon below. 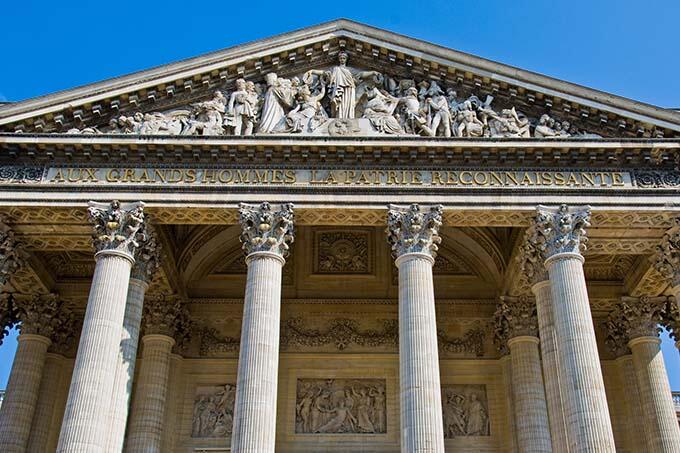 A woman wasn't buried in the Panthéon until 1995

A burial in the Panthéon was a way to celebrate the lives of prominent French figures, however this list was limited initially only to men. It wasn't until 1995 that the Panthéon broke with tradition and entombed physicist and chemist Marie Curie in its hallowed halls for her contributions to the study of radioactivity. Her husband, a physicist named Pierre Curie, is also buried in the Panthéon.

Many prominent French writers have been buried in the Panthéon

France's love of the art and culture clearly carries over to the ghostly residents of the Panthéon, with many writers, philosophers and filmmakers laid to rest within its walls. These include Victor Hugo of Les Miserables and The Hunchback of Notre Dame fame, Alexandre Dumas, Jean Jacques Rousseau, Voltaire and Emile Zola. 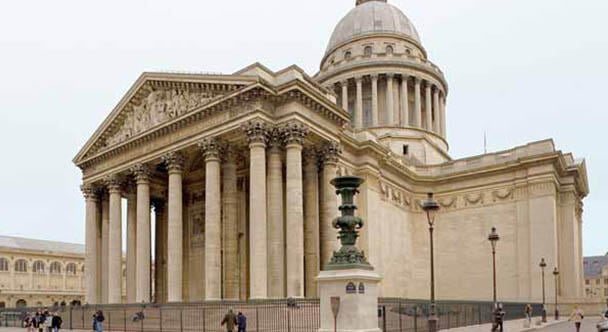 The Panthéon has one of the best views over Paris

Approach one of the Panthéon's guides and ask to climb up to its impressive dome, which boasts an incredible view over the city of lights. Bring your camera and leave the heels at home - it's a steep climb.

The Paris Panthéon is modelled after the one in Rome

The Panthéon is a stunning structure and its neoclassical facade is completely at odds with the French skyline, calling to mind visions of ancient Rome rather than grand French sensibilities. The most notable difference between the two is that French architects have added a gigantic spired dome to it.

The Panthéon was initially a church

When the Panthéon was designed, it was intended to be a church built to honour St. Genevieve, a saint who is said to have saved Paris through mass prayer, and her remaining artefacts. It was commissioned by King Louis XV to replace a previously ruined church. 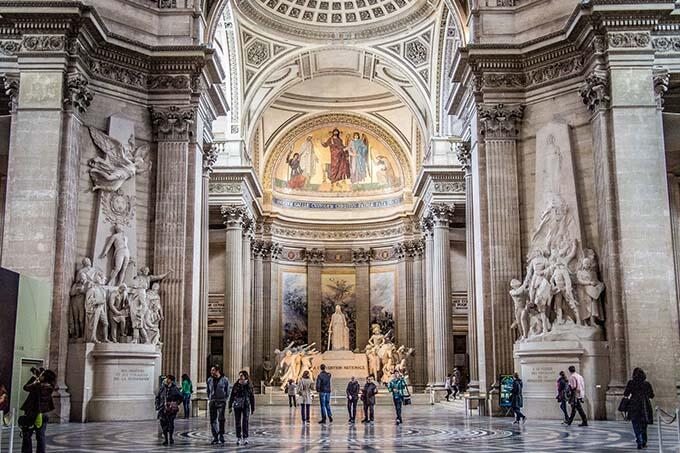 After the French Revolution took place, the Panthéon's purpose shifted

As a project of King Louis XV, the Panthéon was a symbol of the monarchy. After the French revolution, the new government transformed it into a place to honour those that had passed away fighting for the new chapter of French history and the greatest French men.

The Panthéon is a combination of neoclassical and Gothic architecture

Architects Jacques-German Soufflot undertook an ambitious project with the Panthéon. Its neoclassical exteriors are inspired by ancient Roman architecture, whereas its impressive and dramatic interiors are undeniably French Gothic. While it's not entirely true to Soufflot's vision, who passed away before its completion, it still draws heavily on his initial designs.

Above the carved figures on the Pantheon's facade, there's an inscription

The French inscription reads 'AUX GRANDS HOMMES LA PATRIE RECONNAISANTE', which is translated to 'To great men, the grateful homeland'.

Léon Foucault proved that the earth rotates in the Panthéon

Foucault conducted an experiment in 1851 to prove that the world rotates on its axis by building a gigantic iron pendulum in the Panthéon. After its success, it was moved to the National Conservatory of Arts and Crafts but a replica remains on display at the Panthéon.

The Panthéon is not only a great historical institution, it's also covered in impressive art

With painted frescoes, mosaics and paintings depicting Saint Genevieve, key moments of French history and scenes from the revolution, the Panthéon has a stunning art collection that could put some museums to shame.

You can use The Paris Pass® to access the incredible Panthéon as well as dozens of other top attractions in Paris. With the pass, you can make huge savings on combined admission vs. paying at the gate. Consider using your pass to pay a visit to this impressive edifice and see its wonders within.